He is God! Another point remains, and it is this: that in case of contagious diseases, such as the plague and cholera, whether cremation of bodies with lime or other chemicals is allowable or not? In such cases, hygiene and preservation is necessarily more important; for according to the clear Divine texts, medical commands are lawful, and 'necessities make forbidden things lawful' is one of the certain rules. Upon thee be the glory of the All-Glorious!"

‘Abdu’l-Bahá, quoted by Marzieh Gail in Summon Up Remembrance, pp 174-6

He is God. The handmaid of God, Miss Barney, had asked a question as to the wisdom of burying the dead in the earth. She said too that scientists in Europe and America, after prolonged and wide-ranging research and debate on this subject, have concluded that according to the dictates of reason, the benefits of cremation have been fully established - and wherein, then, lies the wisdom of the Holy Religions requiring burial in the earth?

As thou art aware, this servant doth not have the time for a detailed explanation, and therefore can write only a brief reply. Where universal phenomena are concerned, no matter how long and hard the human intellect may struggle to find the right procedures or the perfect system, it can never discover the like of the divine creation and its order of transferences and journeyings within the chain of life. For the transferences, the compositions, the gatherings and scatterings of elements, and of constituent parts and substances, proceed in a chain that is mighty and without flaw. Observe the effective universal laws and see to what a degree they are solidly established, secure and strong.

And just as the composition, the formation, and growth and development of the physical body have come about by degrees, so too must its decomposition and dispersal be gradual. If the disintegration be rapid, this will cause an overleaping and a slackening in the chain of transferences, and this discontinuity will impair the universal relationships within the chain of created things.

For example, this elemental human body hath come forth from the mineral, the vegetable and the animal worlds, and after its death will be entirely changed into microscopic animal organisms; and according to the divine order and the driving forces of nature, these minute creatures will have an effect on the life of the universe and will pass into other forms.

Now, if you consign this body to the flames, it will pass immediately into the mineral kingdom and will be kept back from its natural journey through the chain of all created things.

The elemental body, following death, and its release from its composite life, will be transformed into separate components and minuscule animals; and even though it will now be deprived of its composite life in human form, still the animal life is in it, and it is now entirely bereft of life. If, however, it be burned, it will turn into ashes and minerals, and once it has become mineral, it must inexorably journey onward to the vegetable kingdom, so that it may rise to the animal world. That is what is described as an overleap.

In short, the composition and decomposition, the gathering and scattering and journeying of all creatures must proceed according to the natural order, divine rule and the most great law of God, so that no marring nor impairment may affect the essential relationships which arise out of the inner realities of created things. This is why, according to the law of God, we are bidden to bury the dead.

The peoples of ancient Persia believed that earth-burial was not even permissible; that such burial, to a certain degree, would block the coursings and journeyings required by nature. For this reason they built Towers of Silence open to the sky, on the mountain tops, and lay the dead therein on the surface of the ground. But they failed to observe that burial in the earth doth not prevent the natural travellings and coursings which are an exigency of creation - that rather, earth-burial, besides permitting the natural march of phenomena, offereth other benefits as well.

And briefly stated, beyond this, although the human soul hath severed its connection with the body, friends and lovers are still vehemently attached to what remaineth, and they cannot bear to have it instantly destroyed. They cannot, for example, see the pictured face of the departed blotted out and scattered, although a photograph is only his shadow and in the end it too must fade away. So far as they are able, they protect whatever reminder they have of him, be it only a fragment of clay, a tree, or a stone. Then how much more do they treasure his earthly form! Never can the heart agree to look on the cherished body of a friend, a father, a mother, a brother, a child, and see it instantly fall to nothing - and this is an exigency of love.

Thus the ancient Egyptians mummified the body that it might remain intact to the end of time, their belief being that the longer the dead endured, the nearer they would draw to the mercy of their gods. Yet the Hindus of India cremate the body without any concern, and indeed the burning is a solace to their hearts. This lack of concern, however, is fortuitous: it deriveth from religious beliefs and is not a natural thing. For they suppose that the more rapidly the body is destroyed, the nearer it will come to divine compassion. This is the opposite of what the ancient Egyptians believed. The Hindus are even persuaded that, at soon as the body is with greater rapidity disintegrated, forgiveness will be assured, and the dead will be blessed forevermore. It is this belief which reconcileth them to the cremation. Greetings be unto thee, and praise. I did not have the time to write even a line, but out of regard for Miss Barney, this has been set down. (signed) 'Ayn-'Ayn

‘Abdu’l-Bahá, quoted by Marzieh Gail in Summon Up Remembrance, pp 174-6

The elemental atoms which constitute all phenomenal existence and being in this illimitable universe are in perpetual motion, undergoing continuous degrees of progression. For instance, let us conceive of an atom in the mineral kingdom progressing upward to the kingdom of the vegetable by entering into the composition and fibre of a tree or plant. >From thence it is assimilated and transferred into the kingdom of the animal and finally, by the law and process of composition, becomes a part of the body of man. That is to say, it has traversed the intermediate degrees and stations of phenomenal existence, entering into the composition of various organisms in its journey. This motion or transference is progressive and perpetual, for after disintegration of the human body into which it has entered, it returns to the mineral kingdom whence it came and will continue to traverse the kingdoms of phenomena as before. This is an illustration designed to show that the constituent elemental atoms of phenomena undergo progressive transference and motion throughout the material kingdoms.

He feels that, in view of what ‘Abdu’l-Bahá has said against cremation, the believers should be strongly urged, as an act of faith, to make provisions against their remains being cremated. Bahá’u’lláh has laid down as law, in the Aqdas, the manner of the Bahá’í burial, and it is so beautiful, befitting and dignified, that no believer should deprive himself of it.

There is nothing in the teachings against leaving our bodies to medical science. The only thing we should stipulate is that we do not wish to be cremated, as it is against our Bahá’í laws. As many people make arrangements to leave their bodies to medical science for investigation, he suggests that you inquire, either through some lawyer friend or through some hospital, how you could do this, and then make the necessary provision in your Will, stipulating that you wish your body to be of service to mankind in death, and that, being a Bahá’í, you request that your remains not be cremated and not be taken more than an hour's journey from the place of your death. The spirit has no more connection with the body after it departs, but as the body was once the temple of the spirit, we Bahá’ís are taught that it must be treated with respect.

As was explained to your assembly in a letter written on behalf of the Universal House of Justice on 10 January 1978, if a Bahá’í make a provisions in his will that is contrary to Bahá’í law, that provision is null and void in Bahá’í law, and neither the Bahá’í relatives nor the spiritual assembly are permitted to fulfil it. Thus, if a Bahá’í states in his will that his remains are to be cremated he should, nevertheless, be buried in accordance with Bahá’í law unless there is some element of the civil law would prevent such an occurrence-in which case the civil law would have to be followed, but the assembly, as indicated above, could take no part in it.

Concerning your question about cremation, the Bahá’í law stipulates burial. The instructions of Bahá’u’lláh contained in His most holy book make this law clear. Shoghi Effendi, in a letter written on his behalf to an individual believer in 1955, comments that ‘Abdu’l-Bahá...also explained that burial is natural and should be followed. 'The explanation of the master referred to by Shoghi Effendi is found in Tablets revealed by Him. One of those was published in Star Of The West, Volume XI, No. 19, page 317, from which we quote: "'Thy letter has been received. Due to scarcity of time, I write the answer briefly: The body of man, which has been formed gradually, must similarly be decomposed gradually. This is according to the real and natural order and divine law. If it had been better for it to be burned after death, in its very creation it would have been so planned that the body would automatically become ignited after death, be consumed and turned into ashes. But the divine order formulated by the heavenly ordinance is that after death, this body shall be transferred from one stage to another different from the preceding one, so that according to the relations which exist in the world, it may gradually combine and mix other elements, thus going through stages until it arrives in the vegetable kingdom, there turning into plants and flowers, developing into trees of the highest paradise, becoming perfumed and attaining the beauty of colour'. "Cremation suppresses it speedily from attainment to these transformations, the elements becoming so quickly decomposed that transformation to these various stages is checked'.  When we realize that our physical bodies actually are composed of elements place in the earth by their creator, and which though the orderly processed of His Law are continually being used in the formation of beings, we can better understand the necessity for our physical bodies to be subjected to the gradual process of decomposition. As at the time of death, the real and eternal self of man, his soul, abandons its physical garment to soar in the realms of God, we may compare the body to a vehicle which has been used for the journey through earthly life and no longer needed once the destination has been reached. 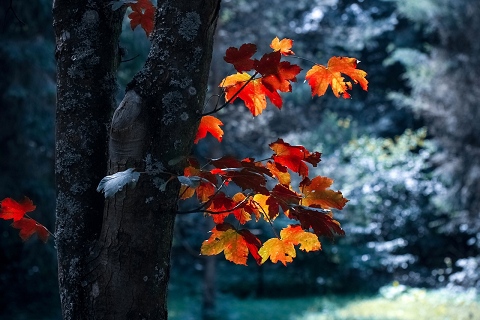